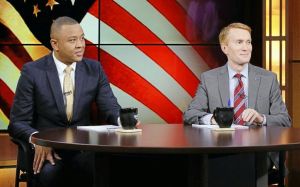 Fifth District Congressman James Lankford held a narrow lead over former Oklahoma Speaker of the House T.W. Shannon heading into the final week of their U.S. Senate primary campaign, according to the latest Oklahoma Poll.

Lankford led Shannon 41 percent to 38 percent in a survey of 415 likely voters in Tuesday’s election. The survey was conducted June 14-18 by SoonerPoll.com and has a 4.81 percent margin of error.

Former state Sen. Randy Brogdon was at 3 percent, with the other four candidates on Tuesday’s ballot totaling 2 percent. Sixteen percent were undecided.

The poll results indicate a runoff between Lankford and Shannon is likely despite the low total for the other five candidates on the ballot.

Overwhelmingly, those surveyed said they wanted a “like-for-like” replacement for retiring U.S. Sen. Tom Coburn. Nearly two-thirds said it was “very important” to elect someone who would vote much the same as Coburn. Another 26 percent said it was “somewhat important.”

The poll of 415 likely voters was conducted June 14-18 by SoonerPoll.com with live interviewers, using a random digit-dialing technique that included cellphone and landline telephone numbers. Results were weighted by age and congressional district. The poll was sponsored by the Tulsa World. The margin of error is plus or minus 4.9 percentage points.