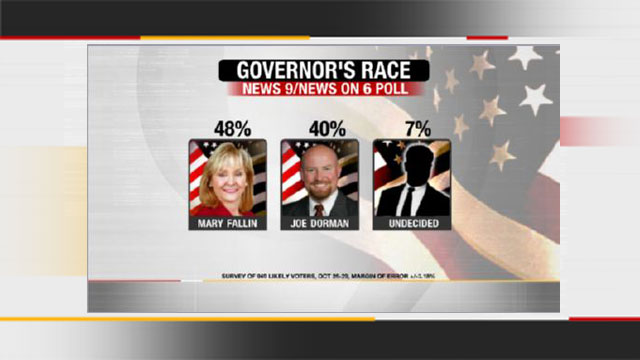 OKLAHOMA CITY -Oklahomans will vote Tuesday on several key races, including a Governor's battle, that is much closer than anyone expected.

Right now Fallin has 48 percent of the votes and still leads Dorman who trails with forty percent. But Dorman has gained a lot of ground going into Tuesday's election.

Over the course of three months Dorman has cut an 18-point gap to eight points. Our pollster says Dorman is getting help from one-in-five Republicans who say they'll vote for him.

“Joe Dorman has attracted a considerable amount of conservative votes which make up fifty percent of our electorate here in the state of Oklahoma,” said CEO ofSoonerPoll.com Bill Shapard. “It just may prove to not be enough in a year when Democrats are struggling even at a nationwide basis.”