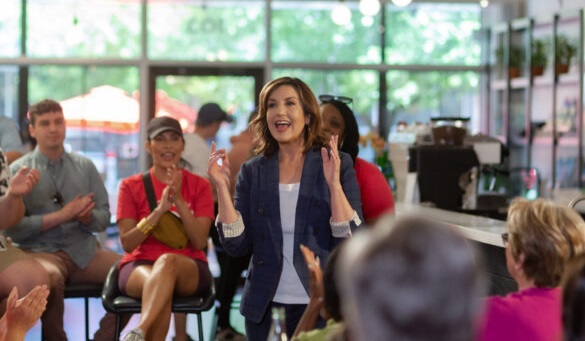 Current School Superintendent and Democratic gubernatorial candidate Joy Hofmeister has a near 4-point lead on incumbent Governor Kevin Stitt within the margin of error in SoonerPoll's second of three polls for the November election. The poll was commissioned by News 9 and News on 6 in Tulsa, the largest Oklahoma television stations in their respective markets.

The poll was weighted to 56.8 percent for Republicans, the highest in 18 years of polling Oklahoma.

[QUESTION] If the upcoming November election for GOVERNOR was held TODAY and you were in the voting booth right now and had to make a choice, for whom would you vote?

More than 94 percent of Democrats support Hofmeister, a double-digit increase from the first poll in September. While solidifying her own party's base, Hofmeister also increased her advantage among Independents, from 59.5 percent to 81.2 percent, as her ads over the last month touted her moderate views and desire to bring Republicans and Democrats together.

Stitt, meanwhile, has struggled to gather his majority Republican party in the state around his campaign. While getting about the same amount of Republican support in both polls, 71.3 percent in the September poll and 72 percent now, the percentage of Republicans undecideds increased by two points. He was able to lower the hermorrhage of Republicans to Hofmeister from 17.5 percent in the September poll to 13.1 percent, but Stitt will have to win back nearly of them to eke out a win.

Nearly two out of three likely voters reported they are not voting straight party this year and picking candidates in individual races. Of those picking individual races, Hofmeister is getting 50.3 percent to Stitt's 34.6 percent. Of those undecided on how they will vote, Hofmeister leads Stitt 49.6 percent to 33.2 percent. To contrast that with other races, Republican U.S. Senator James Lankford is beating his Democratic challenger by nearly seven points among individual race pickers, and Lt. Governor Matt Pinnell is beating his Democratic challenger by nearly 28 points among the same group.

A strong correlation is developing among those voting in the governor's race and the school superintendent's race. Among those voting for the Democrat in the superintendent's race, 91.6 percent are voting for Hofmeister, which may not seem as unexpected, but that support level drops to at or nearly fifty percent support in every other race for statewide office at the State Capitol. Ryan Walters, the Republican for School Superintendent, is Governor Sitt's current Secretary of Education and Sitt endorsed him for governor. It is uncommon for candidates to endorse other candidates when they are on the same ballot.

Hofmeister was also getting 9.1 percent of Trump voters. All other Democrats on the statewide ballot were all getting three percent or less.

Both Stitt and Hofmeister are both from the Tulsa area, where Hofmeister leads Stitt 53.2 percent 35.1 percent in Oklahoma's 1st Congressional District. Both candidates nearly split Oklahoma City's 5th Congressional District, and Stitt led Hofmeister by two points in Oklahoma's old Little Dixie congressional district and by slightly more than ten points in Tom Cole's 4th District. Hofmeister led Stitt, however, by nearly 21 points in the vastly rural district of Congressman Frank Lucas, which indicates her ability to win over rural voters but is a must-win for Stitt.

The scientific study was conducted from October 4-6, 2022 with 301 likely Oklahoma voters selected at random statewide from a dual-frame of both landline and SoonerPoll's proprietary online panel. The landline sample was collected using IVR (Interactive Voice Response). The sample was weighted by party, gender, and congressional district in order to reflect the Oklahoma likely voter population for a general election. The weighting was conducted using a 'layered technique.'

The sample reflects the traditional demographical profile of the Oklahoma likely voter with roughly half of respondents identifying as conservative and nearly a third identifying as Moderate. The study has a Margin of Error (MoE) of ±5.65 percent.