In wake of state's tornadoes, Fallin's approval increases among voters 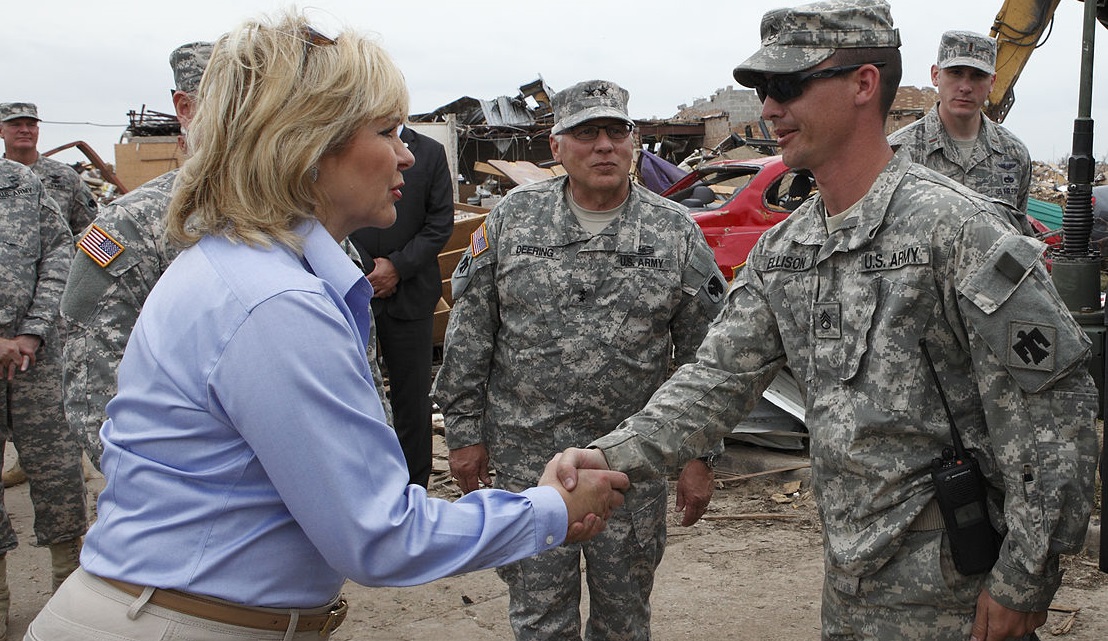 Gov. Mary Fallin may not have any challenger yet announced to run against her next year, but it would appear that whoever may eventually emerge will have a big uphill battle. While this may have been well known anecdotally in political circles, the latest poll results from SoonerPoll.com would now confirm it.

In its latest quarterly poll, Gov. Fallin's approval rating among likely voters has reached an all-time high, 71%, since SoonerPoll began measuring the governor's approval in 2011 when she was sworn in.

This high approval rating comes in the wake of the governor's leadership in helping Oklahoma recover from this year's season of devastating tornadoes.

"Despite some criticism over school storm shelters, Fallin gets good marks for handling the recent tornadoes in the state," said Dr. Keith Gaddie (@KeithGaddie), political science professor at the University of Oklahoma.

“She has emergency management experience,” says Gaddie, pointing out that as lieutenant governor, she dealt with the Oklahoma City bombing as well as tornadoes. “She’s good substantively and stylistically."

Not all of her actions as governor have met with the approval of a majority of likely voters, some critics note, pointing to her decision to turn down additional Medicaid funding under Obamacare, and her signing the expansion of horse slaughter in the state.

Still, the economic trade winds may be at Fallin's back going in next year's reelection. Oklahoma's 5 percent unemployment rate is the lowest in the country for any state with a population of more than 3 million people, adding 54,000 new jobs. She has also restored the state's savings account, the Rainy Day Fund, from less than $3 in 2011 to more than $530 million.

"Fallin also has a good record with social conservatives," notes Hastings Wyman of the Southern Political Report. Self-identified conservatives make up slight more than half of the Oklahoma electorate. Earlier this year, Fallin received praise from National Right to Life for signing three anti-abortion measures that passed the legislature, including parental notification before abortions can be performed on a minor.

It remains unseen, however, who will run against the governor next year, if anyone, and how effective he or she will be in bringing down Fallin's high approval ratings. Plus, the clock is ticking, and every day the governor gets stronger as any would-be competitor now has one less day in raising vital campaign dollars.

Fallin, Oklahoma's first female governor, has already amassed a campaign war chest that puts her well on her way of matching, if not besting the nearly $4.1 million she raised in her successful 2010 gubernatorial campaign.

“She’s stronger than goat’s milk,” says longtime Oklahoma political analyst Mike McCarville (@McCarvilleRept). “I don’t see a Republican challenger or even whether the Democrats can come up with a sacrificial lamb or not.”

SoonerPoll.com conducted the random-sample, scientific survey from May 22 through June 12, using live telephone interviewers. Of the 402 respondents who participated, 108 were contacted by cell phone and 295 by land line. The combined results have been weighted to adjust for variation in the sample relating to age, sex and political party. The margin of error is plus or minus 4.9 percentage points. For smaller subgroups, the margin of sampling error is larger.