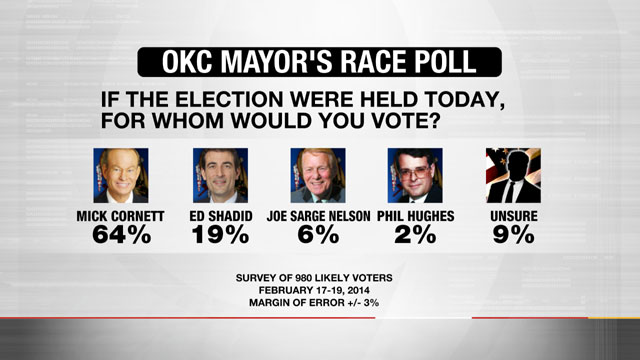 "Cornett's support is broad among all major demographical segments, including all three parties, age and political persuasion," said Bill Shapard, CEO of ShapardResearch, who conducted the poll on behalf of News 9 and the Oklahoma Gazette. "Three things are working in Cornett's favor. His term has been favorable to voters -- lacked any real scandal, plus his conservative values reflect that of the electorate, and he has the power of incumbency."

The poll's sample consisted of 980 likely voters who were selected at random using landlines and cell phones. Results were weighted by sex and age, and stratified using a model of previous city mayoral elections. The poll was conducted between February 17 and February 19 and has a margin of error of plus or minus three percentage points.

About the News9/Oklahoma Gazette Poll

The poll of 980 likely Oklahoma City voters was conducted February 17-19 by ShapardResearch/SoonerPoll.com, using a dual frame of randomly selected landlines and cell phones. Landlines were administered by IVR (Interactive Voice Response) and cell phones by live interviewer. Results were weighted by sex and age, and stratified using a model of previous city mayoral elections. The poll was sponsored by News9 and the Oklahoma Gazette. The margin of error is plus or minus 3.13 percentage points.