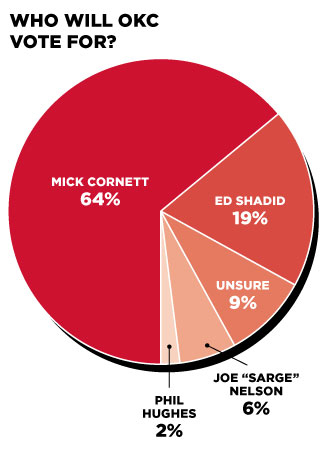 Results of the poll were weighted by sex and age and were adjusted using a model reflecting participation in previous Oklahoma City mayoral elections. The poll was conducted from February 17 to 19, 2014.

Selected indicators cross-tabulated from the poll are shown below.

The representations for “Other” in the graphs include all selections for Joe “Sarge” Nelson, Phil Hughes, Undecided, Don’t Know and Unsure. Results have been rounded to the closest percentage.

If the Oklahoma City mayoral election were held today, Mayor Mick Cornett would win, according to a recent poll.

A News9/Oklahoma Gazette poll of likely voters showed that Cornett, the incumbent, led the fray with nearly 64 percent of the vote.

About the News9/Oklahoma Gazette Poll

The poll of 980 likely Oklahoma City voters was conducted February 17-19 by ShapardResearch/SoonerPoll.com, using a dual frame of randomly selected landlines and cell phones. Landlines were administered by IVR (Interactive Voice Response) and cell phones by live interviewer. Results were weighted by sex and age, and stratified using a model of previous city mayoral elections. The poll was sponsored by News9 and the Oklahoma Gazette. The margin of error is plus or minus 3.13 percentage points.