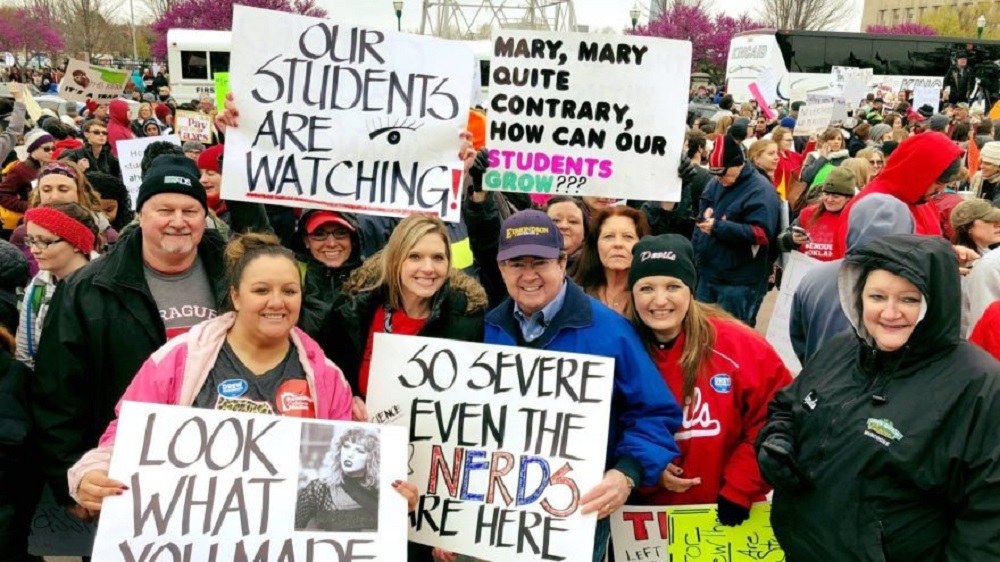 If this election was just teachers voting only, Edmondson would win by a mile. In a scientific online survey of Oklahoma teachers, chosen at random throughout the state, 63.7 percent would be voting for Edmondson and 21.6 percent for Stitt.

In a follow-up question as to why those were voting for Edmondson, "his stance on education" and he is "for the teachers" was 62.5 percent of the responses. For those voting for Stitt, "he is not a career politician" was the number one response with 26.1 percent.

Governor Mary Fallin also didn't fair well with teachers, as an overwhelming 87.3 percent had an unfavorable opinion of her, with 66.7 percent saying "very unfavorable."

President Donald Trump faired better with half favorable and the other half unfavorable, and favorability of the two gubernatorial candidates mirrored fairly closely the election ballot choice.

Teachers also believed Oklahoma was going in the wrong direction with 62.7 percent, where other polling of likely voters is 56.1 percent.

If should be noted that this sample of teachers was 53.9 percent Republican and 40.2 percent Democratic, which is very close to the overall turnout on Election Day of all voters. In other analysis, these percentages are similar to the overall breakdown of teachers by party affiliation.

Fifty-eight percent of Republican teachers said they were voting for Edmondson because of his stance on education.

The news wasn't all bad for Republicans. School Superintendent Joy Hofmeister received the support of 53.9 percent of teachers, including 41.5 percent of Democratic teachers. Thirty-one percent overall said they were voting for Democrat John Cox and 14.7 percent were undecided in the race.

Lastly, teachers did not like State Question 801, which would allow property tax funds collected at the county level to be used for in classroom needs including teacher pay. Sixty percent opposed the measure and only 32.3 percent supported it. While SQ801 is favored by 55 percent of likely voters in other polling, the school superintendents' association has come out against the measure.

The study was conducted online October 29-November 2, 2018 and respondents were selected at random among those with a teaching certificate in the state of Oklahoma and registered to vote. Teachers were identified by filtering out only teachers who were currently employed, retired, or looking for a teaching position in the state.

Weighting was not required for the study as the demographical profile of the sample was very similar to the profile of all teachers in the state.