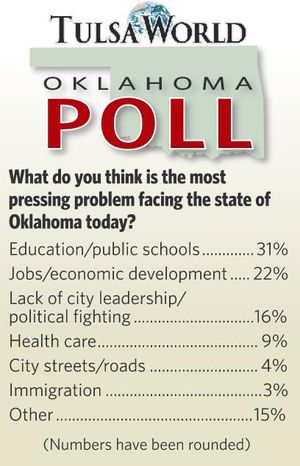 Education may not have been the deciding issue for Oklahoma voters in Tuesday’s election, but it certainly was a big one.

In a survey conducted Oct. 25-29 by SoonerPoll, nearly one-third of those responding said education is the state’s most pressing problem.

While education has usually ranked among the top three responses in the 21 years the Oklahoma Poll has asked the question, its 31.2 percent share this time was the highest since early 2003.

“It kind of gets put on the back burner,” said poll participant Heather Williams of Inola. “I don’t think it is a priority to be at the top. That’s why (college graduates) with teaching certificates are moving to other states.

And I’m disheartened to see a lot of older teachers still teaching because they have to.”

Second on the most-pressing problem list was jobs and the economy, at 22 percent, followed by political leadership at 16 percent.