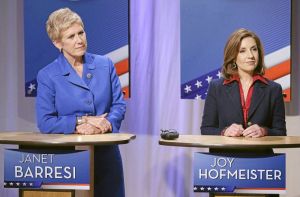 Perhaps the most surprising number, however, is that nearly three in 10 of those surveyed June 14-18 had not made up their minds despite the unusual attention give the race.

Hofmeister was the choice of 35 percent of the 415 likely voters in Tuesday’s Republican primary surveyed statewide. Twenty-two percent went for Barresi, and 14 percent for Brian S. Kelly, a former football coach from Edmond who has campaigned very little.

Barresi and Hofmeister, on the other hand, have engaged in a sharp exchange that has sometimes bordered on the personal. Each has accused the other of dishonesty and possible illegal activity.

Hofmeister resigned from the state board of education two years ago after a series of disagreements with Barresi.

The poll of 415 likely voters was conducted June 14-18 by SoonerPoll.com with live interviewers, using a random digit-dialing technique that included cellphone and landline telephone numbers. Results were weighted by age and congressional district. The poll was sponsored by the Tulsa World. The margin of error is plus or minus 4.9 percentage points.