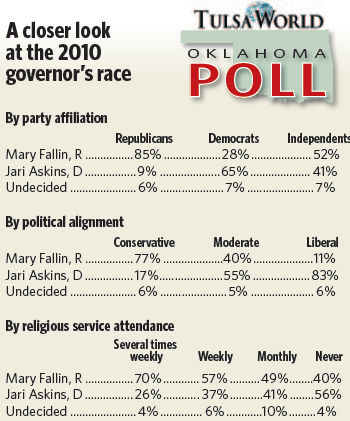 The Republican leads Askins in the governor's race by 18 points.

Any way you look at the numbers, Jari Askins has a tough row to hoe on Tuesday.

The Democratic gubernatorial candidate famous for confounding pollsters and pundits trails Republican Mary Fallin by 18 points, according to an Oklahoma Poll conducted Oct. 18-23.

And, although it is true that Askins overcame a 16-point deficit at a similar point in the primary campaign to defeat Drew Edmondson, there are some important differences.

One is voter motivation. Although the latest Oklahoma Poll suggests growing enthusiasm among Oklahoma
Democrats, it still lags that of Republicans.

Another difference is President Barack Obama. He wasn't much of a factor in the primary but is almost certain to be one in the general election. Much of Fallin's campaign - and of Oklahoma Republicans in general - is built on reminding Oklahomans how much they dislike Obama.

"It's difficult sometimes for (voters) to look at Oklahoma Democrats and see separation between them and the national party," said SoonerPoll.com President Bill Shapard.