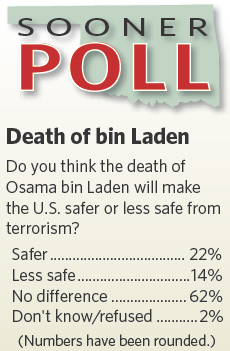 Osama bin Laden's name may have been synonymous with terrorism and the attacks of Sept. 11, 2001, but Oklahomans seem to have considered him almost irrelevant by the time of his death earlier this year.

Sixty-two percent of those surveyed in late July and early August by SoonerPoll.com said bin Laden's death made no difference in protecting the nation from terrorism.

"I don't feel that killing him made any difference either way," said Arthur Conkright of Checotah.

That is in contrast to both a national poll conducted in early May, shortly after bin Laden's death, and a 2006 SoonerPoll.com survey.

In 2006, more than three-quarters of 1,060 Oklahomans who were surveyed statewide said killing or capturing bin Laden was very or somewhat important in the war on terror.