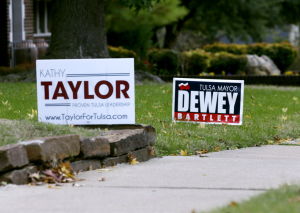 The math is simple.

About 46,000 more Republicans than Democrats are registered to vote Tuesday, and even though the election is supposed to be nonpartisan, it is no secret that Taylor is the Democrat on the ballot.

Incumbent Dewey Bartlett is the Republican.

And, according to an Oklahoma Poll conducted last week, Bartlett is doing better with Democrats than Taylor is with Republicans. If that trend holds up, only a greatly superior voter turnout effort by the Taylor campaign can return her to the office she held from 2006 to 2009.

Independents, who make up about one-eighth of the city's eligible voters, favor Bartlett over Taylor, 44 percent to 41 percent.

The brightest spot for Taylor in the poll conducted Nov. 1-5 is that it shows Bartlett short of a majority. But Taylor's prospects of picking up enough of the undecided votes to make a difference are fairly dim.

Ideologically and by party affiliation, the undecideds are almost evenly divided between liberal and conservative, Democrat and Republican.