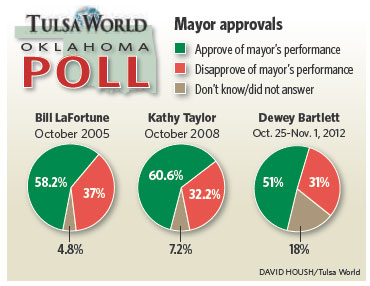 Mayor Dewey Bartlett and former Mayor Kathy Taylor are nearly even in support from Tulsans as to who they would vote to be the next mayor, a new Tulsa World poll shows.

An Oklahoma Poll of 311 city voters, conducted Oct. 25 to Nov. 1, supplied a list of potential mayoral candidates' names and asked, if the election were held today, who they would choose.

Bartlett got 24 percent to Taylor's 22 percent. Former City Councilor Bill Christiansen, who has announced his candidacy, received 11 percent, followed by former legislator Lucky Lamons with 5 percent, businesswoman Sharon King Davis with 5 percent, and Planning Commission member Bill Leighty with 1 percent. But with the mayor's election not until next year, 32 percent were undecided. The margin of error is plus or minus 5.56 percentage points.

SoonerPoll.com's Bill Shapard said Bartlett is benefiting from "the power of incumbency."

"Some of the other names will drop off and decide not to run," he said. "The question is: Where will their support go? They had a chance to pick Dewey Bartlett, and they chose someone else."

Shapard said he wasn't surprised by Taylor's strong showing, noting that Tulsa is home to a loyal base of Democrats, even though the next mayor's election will be nonpartisan for the first time.

The Oklahoma Poll also gauged Bartlett's approval rating, which showed him to have 51 percent support, up from 47 percent a year ago.

The poll of 311 likely voters was conducted by SoonerPoll.com, using a random digit dialing technique that included both cellphone and landline telephone numbers.

Interviewers collected the data Oct. 25-Nov. 1. Results were weighted by gender and phone status (cellphone only/landline only/both). The poll was sponsored by the Tulsa World.

The margin of error is plus or minus 5.56 percentage points. This poll conforms to the Standards of Disclosure of the National Council on Public Polls. A complete description of the methodology can be found here.