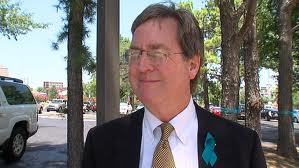 The survey of 400 likely voters showed Taylor with 36 percent, Bartlett with 35 percent and Christiansen with 20 percent.

Jerry Branch was favored by one poll respondent, Lawrence Kirkpatrick by none. Nine percent of respondents were undecided.

Under the city's new non-partisan election system, Tuesday's balloting will determine Tulsa's next mayor if one candidate receives a clear majority of the vote.

If two candidates combine for a majority, they will advance to the general election on Nov. 12.

If no two candidates combine for a majority, as many as are needed to reach a majority will compete in an Aug. 13 runoff.

Tuesday's election may be officially nonpartisan, but voter preferences clearly followed party lines in the Oklahoma Poll, which was conducted for the Tulsa World by SoonerPoll.com. Republicans Bartlett and Christiansen combined for 78 percent of the GOP vote.

Taylor, a Democrat, got 61 percent of the Democratic vote.

But, significantly, Bartlett and Christiansen combined for 28 percent of the Democratic vote compared to just 15 percent of Republicans who say they're for Taylor.