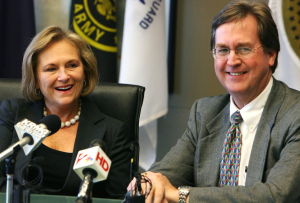 Christiansen endorsed Taylor last week, after the end of the polling period.

"Dewey Bartlett has Tulsa headed in the right direction after some of the things that Taylor did," said Tim Belford, who was among the poll respondents interviewed by the Tulsa World. "She got us into debt and things like that."

Belford said ONEOK Field and the new City Hall are examples of unwise spending by Taylor during her 2006-2009 term as mayor.

"Taylor spent too much money," he said.

"He's done a good job with the city's finances," said Richard Freeman. "He's overseen the police and firefighters well. The city is making progress on streets."

Others, though, think Taylor deserves most of the credit for the street improvements, since the current capital improvement package was passed during her term. They also think she is a stronger leader.

"The time Kathy was in before, I really liked the way she ran the city," said Charles Roach. "She had the city going the right way. Since Dewey Bartlett's been in there's been nothing but turmoil."

Brenda Washington said she'll vote for Taylor, but not because she's a big fan.