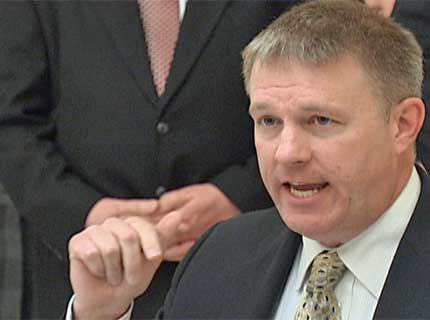 Oklahoma City -- Former State Representative Kevin Calvey has a two-to-one lead over the next closest challenger in Oklahoma's 5th Congressional District seat being vacated by Rep. Mary Fallin, who is running for Governor. However, a large percentage of likely voters remain undecided with the election a little more than four months away.

�Calvey�s early lead should be expected since he had previously run for the seat in 2006,� said Dr. Keith Gaddie, Vice-President of SoonerPoll.com. "However, there is a lot of time left in this contest and tremendous room for all candidates, including Calvey, to increase their levels of support."

The poll of Republicans whom are likely to vote in the 5th District primary shows Calvey putting some early distance between him and his competitors with 19.9 percent of the vote. State representative Mike Thompson and political newcomer James Lankford are the next closest competitors for the seat with 8.6 percent and 7 percent of the vote respectively. Candidates Dr. Johnny Roy and Rick Flanigan trailed with 1.3 percent and .7 percent respectively. A large majority, 62.6 percent, remain undecided.

SoonerPoll.com, Oklahoma�s public opinion pollster, conducted the scientific study using live interviewers by telephone of 302 Republicans likely to vote in the Oklahoma 5th Congressional District Primary in July from February 25 � March 10. The study has a margin of error of � 5.64%.

Thompson is a former staff member to a previous 5th Congressional district incumbent, Congressman Ernest Istook (R-Warr Acres). Lankford is the former director of the Falls Creek summer camp. Calvey is a former Oklahoma state representative and most recently served in the Army National Guard stationed in Iraq.

�Most of the candidates have been aggressively raising money, but not really spending any of it yet,� said Gaddie. �Voters are going to want to learn more about the candidates before making a decision.�

As of late, Calvey has been running television ads, Thompson�s campaign has been making phone calls to voters and knocking on doors, and Lankford has been mailing information to voters and has also established a substantial web-based and social media presence.

State Representative Shane Jett, who just announced his candidacy for the seat on Friday, was not included in the poll that finished fielding last Wednesday prior to his announcement. No Democrat has shown any interest in the race. The primary will be held July 27.