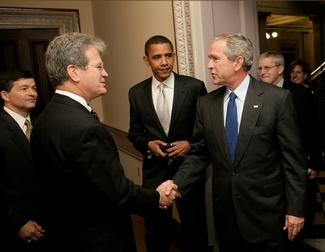 Sooners split on Bush, generally like Henry and both senators.

Approval ratings for President Bush, U.S. Sens. James Inhofe and Tom Coburn and Gov. Brad Henry remained steady through the last nine months of 2007, according to the most recent Oklahoma Poll.

The survey of 745 likely Oklahoma voters was conducted Dec. 16-19 by SoonerPoll.com.

Inhofe's approval rating of 56 percent was essentially unchanged from April, the last time the Oklahoma Poll asked about his job performance. Inhofe appears to be well on his way to election to a third full term in November despite hopeful sounds from Democrats backing the candidacy of state Sen. Andrew Rice.