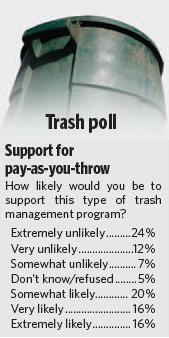 Tulsa should move to a once-a-week, volume-based trash service with city-provided, roll-away carts, the Mayor's Task Force on Refuse and Recycling has recommended.

Recycling collection should be included at no extra cost and green waste, such as lawn clippings and leaves, should be placed in biodegradable bags to be separated from the waste stream, the group also said. Everything should be picked up on the same day.

The task force, which was formed last fall by then-Mayor Kathy Taylor, turned over its recommendations last week to the Tulsa Authority for the Recovery of Energy, which is the city's trash board.

Now it is up to the board, in conjunction with Mayor Dewey Bartlett and the City Council, to determine the future direction of the services.

Beverly Anderson, who led the task force and is the board's vice chairwoman, said TARE and city officials are "not under any obligation to follow the recommendations."

But she said they were formulated after the group reviewed the best practices from 50 other refuse and recycling systems; gathered input from other cities, vendors and contractors; and received public input through meetings, polls and focus groups.