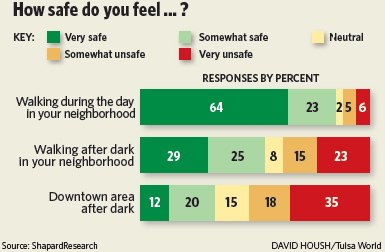 The home break-in didn't happen to Kathryn Lyons but to a friend in her midtown neighborhood.

Still, Lyons said, she felt invaded just the same and knew she had to do something about it.

This led to her reviving an Alert Neighbors program in December and drafting other residents for the effort, which stretches from 21st to 51st streets and Harvard Avenue and Riverside Drive.

"As residents, we have to do something because, for some reason, crime has gotten so bad in midtown," she said, referring mostly to burglaries.

"I want the criminals to think, 'We don't want to go in that neighborhood because everybody's watching.' "

A recent survey of 1,800 Tulsans found that while 87 percent feel safe walking in their neighborhoods during the day, the number drops to 54 percent when it comes
to walking after dark.

The survey was conducted by Shapard Research from Dec. 12 to Jan. 21 and has a margin of error of plus or minus 2.3 percentage points.