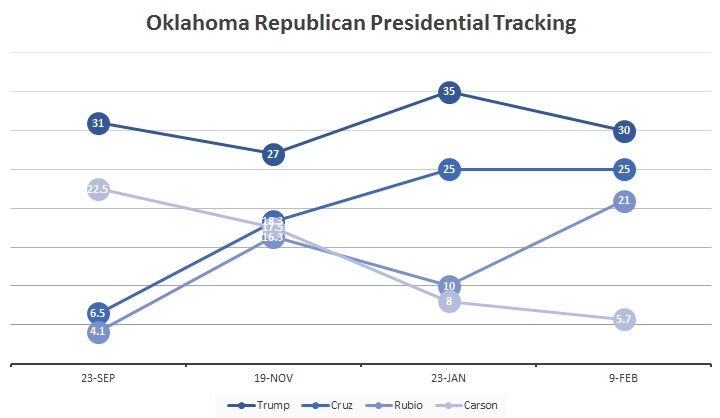 The latest SoonerPoll tracking of the Republican presidential candidates continues to show Trump leading, but the effect of those dropping out of the race and the decline of others may spell problems for him through Super Tuesday.

Donald Trump seems to be stuck. While currently at 30 percent of the Republican electorate, he has not been able to break 35 percent which has been his high among the last four SoonerPolls since September of last year.

The poll also reflects the impact of two Republican candidates who have dropped out since the last poll was taken, Rand Paul and Mike Huckabee.

Those undecided have increased three percent since the last poll, but it should be noted that the 7.7 percent of Republicans who are now undecided is extremely low compared to 28 percent undecided in the Democratic ballot.

The greatest change in this poll is Marco Rubio, who rocketed to 21 percent from 10 percent just a week and half ago after initially falling seven points since November. Rubio has been performing well in national polling as well and went under attack at Saturday's debate in New Hampshire. It should be noted that this poll started fielding on Saturday before the debate and ended Monday night, so it includes support of Rubio before and after his much criticized debate performance. Some national polling since the debate has shown some negative impact while other polls have not.

Ted Cruz had been on a steady climb since the first poll last November and remains at 25 percent since the last poll a week and half ago.

Ben Carson continued his decline, falling another 2 points since the last poll where he experienced a 10-point fall from the November poll, and a combined drop of nearly 17 points since last September.

Liberal and moderate Republicans, which only makes up one-in-four Republicans, favor Trump while all three top vote-getters almost evenly split the conservative Republican vote, which is 70 percent of the electorate.

None of the candidates have an edge among male or female voters, but Trump leads among Boomers and Seniors -- the largest voting block -- by four to nine points which is helping him maintain his lead.

"While there is a lot movement in this poll, Trump, who remains the front-runner with a small lead now, is not benefiting from it," said Shapard. "The lose of two more candidates and Carson's decline... these votes don't appear to be going to Trump."

Shapard went on to speculate that as the field narrows the consolidation could push one or two other candidates beyond Trump, who has only been able to remain the front-runner because of a large field of candidates.

SoonerPoll.com, Oklahoma’s public opinion pollster, asked these questions of Oklahoma likely voters as part of the SoonerPoll Presidential Tracking Poll, which was been conducted in every presidential election year since 2008.

The scientific study was conducted from February 6-9, 2016 with 414 Republican likely Oklahoma voters, 360 Democratic likely voters, and 22 Independent likely voters selected at random statewide from a dual frame of both landline telephone and cell phones. The sample was weighted by age in order to reflect the Oklahoma likely voter population for a presidential primary election.

The sample reflects the traditional demographical profile of the Oklahoma likely voter with roughly half of respondents identifying as conservative. The Margin of Error for the Republican ballot was ± 4.81 percent and ± 5.01 percent for the Democratic ballot.