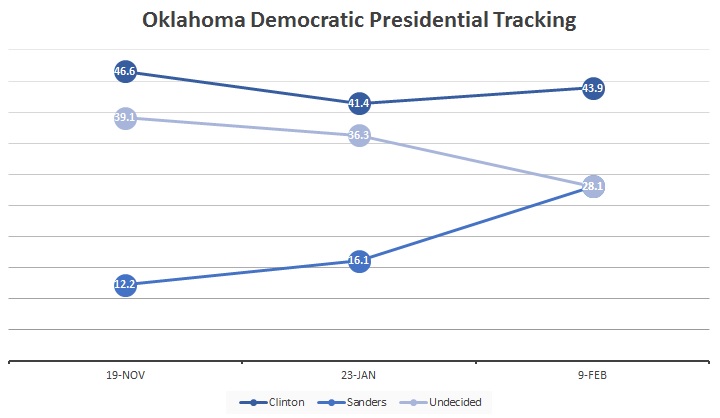 The latest SoonerPoll for the Democratic Presidential ballot should worry Hillary Clinton. While she maintains just a 16-point lead now, that lead has narrowed from 25 points just in the last week and half, and a 34-point lead in November.

Media reports over the last six months have not been kind to Clinton and news just yesterday that the FBI formerly confirmed she was under investigation won't help either. Still, Clinton commands over four-in-ten Oklahoma likely voting Democrats, but seems unable to break 50 percent even after Martin O'Malley dropped out of the race after the Iowa Caucus.

Bernie Sanders however, a self-identified Democratic Socialist, continues to gain votes in Oklahoma among Democrats, increasing to 28 percent from a humble start of 12 percent.

What remains interesting in the race is the still 28 percent of Democrat likely voters that remain undecided in the race. Further analysis shows the greatest percentage of undecideds are conservatives voters, who have watched both candidates in the debates vie for who is the most progressive or liberal.

"The conventional wisdom is that the undecideds will not vote at all," said Bill Shapard, founder of SoonerPoll. "The Democratic ticket is now absent of any conservative or even moderate leaning candidates, leaving no place for Oklahoma conservative Democrats to go."

Independents, overall, showed very little interest in wanting to vote in this year's Democratic presidential primary with only 41 percent saying they would vote. According to internal database research conducted by SoonerPoll, Independents only make up about 6 percent of voters on election day, turning out less than the overall percentage of its own registration, and therefore, the sample size of Independents in this poll are small.

"While this invitation by the Democrats to allow Independents to vote in their primaries looks noble," Shapard said, "it appears there is no great desire to do so."

Clinton commands the female vote 51 percent to only 17 percent for Sanders, but Sanders leads among men 42 to 35 percent.

Unlike the Republican ballot, the Democratic race this year is very ideologically driven. Clinton, who is not seen as far left as Sanders, captures 55 percent of the moderate Democratic vote and wins among those considering themselves "somewhat liberal," but Sanders wins handily among those Democratic voters who identify themselves as "very liberal."

Younger voters favor Sanders, which is seen in national polling as well, but Clinton leads handily among older voters which make up a majority of the Democratic electorate on election day.

SoonerPoll.com, Oklahoma’s public opinion pollster, asked these questions of Oklahoma likely voters as part of the SoonerPoll Presidential Tracking Poll, which was been conducted in every presidential election year since 2008.

The scientific study was conducted from February 6-9, 2016 with 414 Republican likely Oklahoma voters, 360 Democratic likely voters, and 22 Independent likely voters selected at random statewide from a dual frame of both landline telephone and cell phones. The sample was weighted by age in order to reflect the Oklahoma likely voter population for a presidential primary election.

The sample reflects the traditional demographical profile of the Oklahoma likely voter with roughly half of respondents identifying as conservative. The Margin of Error for the Republican ballot was ± 4.81 percent and ± 5.01 percent for the Democratic ballot.