The Democratic Primary Election: What Happened? 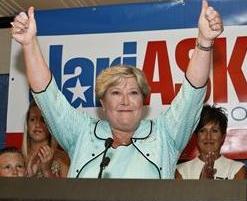 Prior to the July 27th primary election, SoonerPoll was one of several pollsters in the state who had Lt. Governor Jari Askins losing to Attorney General Drew Edmondson in the Democratic Primary Race for Governor.

Since the election, researchers at SoonerPoll have been examining voter turnout and conducting extensive polling in order find out why pre-election polls conducted by our house and others were so drastically different from election results.

�We have waited until now to address the issue because we wanted to have hard evidence as to what happened in the election,� Bill Shapard, CEO of SoonerPoll, said.� �It would be of no use to us or the public at large if we had tried to explain this phenomenon without empirical data from the state election board and our own follow up polling.�

Voter turnout often plays a significant role in an election and in this election it was one of many factors that helped decide the outcome.

When developing a voter turnout model in the state of Oklahoma two counties, Tulsa and Oklahoma, carry more weight than rest because of their population size.

Prior to the election, Tulsa County was considered to be Edmondson�s base. �Edmondson won Tulsa County with 61.8 percent of the vote on Election Day, however Tulsa county had the fourth lowest turnout in the state.

�Since we live in a state so dominated by two large cities, a drastically low turnout in either city would result in a broken turnout model," Shapard said.

Turnout was especially low in Tulsa County, where only 19.9 percent of registered Democrats voted in the election.� Tulsa County had the fourth lowest turnout in the state, well below the average county turnout of 26.4 percent.

Edmondson won Tulsa County by a better than 3 to 2 margin, receiving 61.7 percent of the vote in the primary.� If that margin had held, Edmondson would have won the election if voter turnout in Tulsa County had been 5.67 points better, or 25.6 percent, just under the statewide average.

Similarly, Muskogee, Wagoner and Washington counties were all counties considered to be part of Edmondson�s base that had below average turnout.

�Had Edmondson been able to ensure just an average turnout in his base counties, the election would have gone his way,� Shapard said.