Support for civil asset forfeiture reform on the rise 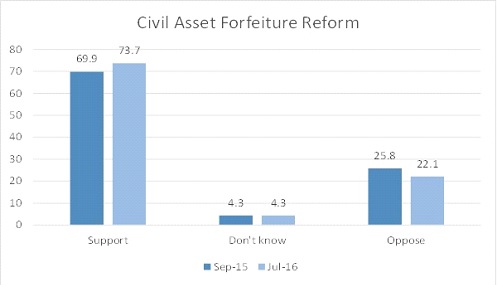 New data from SoonerPoll shows more Oklahomans than ever want to see Civil Asset Forfeiture reform. Support for reform is up to 73.7% in 2016 compared to 69.9% in 2015.

"These numbers clearly show Oklahomans are ready for lawmakers to act on Civil Asset Forfeiture," says Bill Shapard, founder of SoonerPoll. "Despite overwhelming public support during the 2016 legislative session, for whatever reason, leadership decided to brush the issue aside. But, when almost 3 out of 4 Oklahomans want to see this issue addressed, lawmakers really need to pay attention."

Sen. Kyle Loveless (R-Oklahoma City) has championed Civil Asset Forfeiture reform for more than a year and plans to re-introduce legislation in 2017. Sen. Loveless has built a coalition spanning the political spectrum to push for substantive reform next year.

"The work to reform Oklahoma's Civil Asset Forfeiture system has always transcended partisan lines and this new poll only amplifies the call to end the practice of seizing money and property from Oklahomans who have not been convicted of any crime," says Ryan Kiesel, Executive Director of the ACLU of Oklahoma. "Oklahomans across the political spectrum understand that empowering the government to take a person's property or money with very little, if any, actual cause is an affront to our fundamental rights and freedoms."

Senator Loveless believes the burden now lies solely on the legislature to fix a broken system.

"This is not a law enforcement issue, this is an issue where government is wrong to take people's property without proving anything in court," Sen. Loveless says. "Oklahomans of all walks of life, metro area to the smallest town, blue or red, left or right, regardless of where they come from Oklahomans want serious forfeiture reform."

Senator Loveless has requested an interim study on Civil Asset Forfeiture. A date for that hearing has not yet been scheduled.

SoonerPoll.com, Oklahoma’s public opinion pollster, asked these questions of Oklahoma likely voters as part of the SoonerPoll Quarterly Poll, and was commissioned by the left-leaning Oklahoma Policy Institute and right-leaning Oklahoma Council of Public Affairs (OCPA).