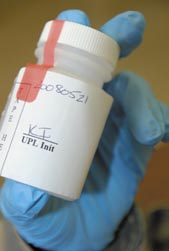 Federal law gives states the right to test welfare recipients for use of a controlled substance and sanction those who test positively. Legislation to make that testing mandatory has already been passed in both Florida and Missouri.

In August, State Rep. Guy Liebmann, R-Oklahoma City, announced that he intends to file similar legislation for the 2012 legislative session.� �It�s just a common-sense bill and one that is already being signed into law in other states,� Liebmann said in a press release.

Liebmann�s legislation will require drug testing of individuals applying for Temporary Assistance for Needy Families (TANF).� Applicants who test positive will be disqualified from the program for one year, unless the individual seeks substance abuse treatment, in which case a provision of the legislation allows for the disqualification to be reduced to six months.

�This is a common-sense reform for the state-operated and -administered TANF program,� said Jonathan Small, fiscal policy director at the Oklahoma Council of Public Affairs (OCPA). �It better ensures that welfare benefits are a temporary, behavior-improving �hand up� rather than a perpetual �handout� that enables unproductive and even destructive behavior.�

A similar pattern emerges when the results are broken down by political label.� Results show that the legislation is supported by 75.7 percent of liberals, 86.4 percent of moderates and 92.4 percent of conservatives.

Further analysis of the results reveals that though a small correlation between low income and opposition to the legislation exists, the legislation is supported by more than 75 percent of respondents in each income bracket.

�The welfare state has done quite enough damage already�eroding marriage, abetting mass fatherlessness, and creating multigenerational dependency,� said Brandon Dutcher, OCPA�s vice president for policy. �To blatantly subsidize drug addiction makes no sense at all. It�s not showing compassion to the welfare recipients, and it�s certainly not showing compassion to the taxpayers.�

SoonerPoll.com, Oklahoma�s public opinion pollster, was commissioned for this poll by the Oklahoma Council of Public Affairs.�� SoonerPoll.com conducted the scientific poll July 25-Aug. 11. Likely Oklahoma voters were selected at random and given the opportunity to participate in the poll by phone or online. Of the 587 respondents who participated, 17 took the survey online and 570 responded via telephone interview. The margin of error is plus or minus 4.04 percentage points.